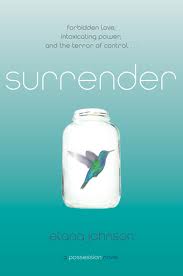 Today is the release of Elana Johnson's new book Surrender! I'm so excited! My ebook automatically arrived during the night!

This is the sequel to her debut book Possession (which my granddaughter is reading right now). It's set in the same world, but with different point of view characters.

What's it about?
Raine has always been a good girl. She lives by the rules in Freedom. After all, they are her father’s rules: He’s the Director. It’s because of him that Raine is willing to use her talent—a power so dangerous, no one else is allowed to know about it. Not even her roommate, Vi.

All of that changes when Raine falls for Gunner. Raine’s got every reason in the world to stay away from Gunn, but she just can’t. Especially when she discovers his connection to Vi’s boyfriend, Zenn.

Raine has never known anyone as heavily brainwashed as Vi. Raine’s father expects her to spy on Vi and report back to him. But Raine is beginning to wonder what Vi knows that her father is so anxious to keep hidden, and what might happen if she helps Vi remember it. She’s even starting to suspect Vi’s secrets might involve Freedom’s newest prisoner, the rebel Jag Barque….

In celebration of Surrender's theme, I'm going to share an personal experience I had with never surrendering.

Not long before I turned twelve, my family moved to the Philippines, to my father's new Navy duty assignment. It was only a few days before school was going to start. I went to the swimming pool and met another girl, a year younger than me, Carrie.

She was afraid to jump off the high dive, so we sat up there for the longest time. I kept trying to talk her into it. She really wanted to do it, but looking down at the water was just too much for her, and she'd chicken out at the last moment.

Carrie, nodded, never taking her eyes from the edge.

I jumped and fell down, feet first, slicing into the water with that familiar cooling and yet thrilling sensation.When I hit the bottom, my practiced knees bent, gathering the power from my fall to throw into the push up through the eleven feet of water. Back to the light. Back to the air.

With a forceful woosh, my body was flying up, up through the water. This was the best part for me, to be traveling so fast, not because gravity forced it on me, but because I'd harnessed the energy. My legs had sent me on the upward quest, and my face anticipated bursting through the water and breathing in the air.

Something heavy and strong hit the top of my head. My movement stopped as a searing pain drove down from my head through my spine. I couldn't move my arms. I couldn't breath.

Kicking my legs furiously, I made it to the top. But my lungs still wouldn't work. My arms still didn't work, but my hands managed feeble movements, so I made it the few feet to the side. Finally, my lungs let me gasp in a long, slow breath.

People swarmed around me, pulling me from the water. Off the side, Carrie sobbed. In a haze of pain, I tried to answer their questions. I just didn't want them to move me. Just not jar my back.

Riding in an ambulance isn't fun, especially when the idiot sailors who formed the ambulance crew acted like my little girl body was such a heavy burden for them to carry.

Shore Patrol went to my home to alert my mother there'd been an accident at the pool, so I wasn't at the emergency room very long before she came. My mother, who would only live another three years, brought such loving encouragement that I would be okay.

She was right. I was fortunate nothing had been broken, that only the ligaments and tendons had been pulled. It took time, but I did heal. I was never able to do gymnastics, though, which broke my heart a couple of years later.

Once I was healed enough to go swimming again, I was determined to jump off that high dive. I sat there on top, just like Carrie had, staring at the edge. After a while, I advanced a little closer and stared at the water. I moved aside to let others go. I couldn't do it. I went home with a sunburn.

I went back to the pool. Climbing the long ladder, with force and determination, I reached the top. I didn't let myself think about it. I took a short run and jumped. I did it!

But when I hit the bottom I pushed toward the wall and not straight up. I might have defeated my fear, but I wasn't stupid.

What about you? What have you refused to surrender to?
Posted by Donna at 5:53 AM 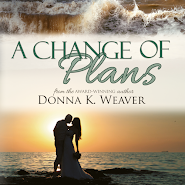