The Shaman's Curse by Meredith Mansfield

I'm excited to share the release of Meredith Mansfield's newest book, and it's the first book in a series. Woohoo! I love her books! 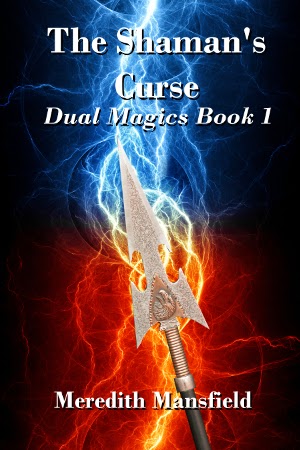 Vatar risked his life to try to save his friend--and failed. Now he has an implacable enemy in the vengeful shaman, who blames Vatar for the death of his only son. In his isolation, Vatar finds some comfort in daydreams. He knows the strange girl he sometimes imagines is just that--a dream. She’d better be.

Because, if she’s real things could get even worse for Vatar. The accepted magic of Vatar’s plains tribe wouldn’t enable him to see or communicate with a girl he doesn’t even know--or know where to find. That would be more like the magic passed down in certain, closely-guarded bloodlines among the ruling class of the coastal cities. And that’s bad. Very bad.

Unlike their own, Vatar’s people think the city magic is evil. If the shaman ever found out, it could be the weapon he needs to destroy Vatar. And yet, finding a way to accept the other side of his heritage may be the only way Vatar can ultimately defeat his enemy.

The two kinds of magic have always been totally separate. Until now.


AMAZON | BARNES & NOBLE | iTUNES | KOBO
The related short story "Becoming Lioness" is free in all those places and more.

Excerpt:
Vatar reined his horse back behind his friends and turned his head slowly to scan around the endless circle of the plains that merged with the sky at the far horizon. The earth was all golden brown now, the grasses prematurely dried up by the lack of rain. Here and there, the green smudges of trees dotted the savannah, marking the waterholes. The darker blue-green line of the Great Forest marked the eastern horizon. Another line of trees, much closer, marked the course of the river. Everything seemed normal, but that spot between his shoulder blades still itched with a premonition of undefined danger that grew stronger the closer they got to the river.

Ariad slowed down to match Vatar's pace, allowing the other two boys to go ahead. "Lions?"

Vatar shook his head. That was one danger he could dismiss out of hand. His connection to the Spirit of the Lion told him the nearest lions--in the shade at a distant waterhole--were sleeping off a full meal. "None we need to worry about."

"What then?" Ariad asked.

"I don't know. Something . . ." Vatar caught himself before he said too much. It was one of his mother's oldest admonitions--almost as old as "Don't touch the fire!" From the very first time he'd tried to describe that infrequent feeling of danger, she'd warned him not to mention it to anyone but her and Pa. Even his little sister Kiara didn't know about it.

Vatar was already different enough--dark-haired and strongly-built among the tall, lanky, fair Dardani. Though she was Dardani now, his mother had come originally from a far-off city on the sea coast. The Dardani would accept his hair color and height, but not anything that even hinted at forbidden magic. Other than a few old stories, Vatar had no idea why his people had such deep-seated superstitious fear of magic, but he knew full well that it was one of the few things they'd never forgive.

Vatar didn't think the itch between his shoulder blades was magic, any more than his ability to sense lions. That was his connection to his clan's totem spirit--just like Ariad could sense eagles. But Mother's caution was second nature by now. He forced one corner of his mouth up in a half-smile. "Maybe I've just heard one too many of Pa's stories about Themyri ambushes."

Ariad barked a laugh. "Haven't we all? To hear our fathers tell it, the river is almost as dangerous as the Great Forest." He shuddered a little at the reference to the one place all plains-dwelling Dardani feared most and made a surreptitious sign against magic and evil spirits. Being Eagle Clan, Ariad's hand curled in an imitation of an eagle's talons.


About the author:
Professionally, I've been a financial analyst and a visual basic programmer. I also have a paralegal certificate, although I've never worked in that field. It's anybody's guess what I'll be when I grow up.
Imagining stories and writing have always been an important part of my life. It's one I finally got to spend a significant amount of time on while I cared for my mother who had Alzheimer's disease.