I'm switching up my P & Q posts today and tomorrow
to accommodate a blog hop for the book Protected by Cindy M. Hogan. 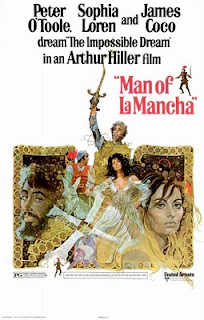 The movie Man of La Mancha starring Peter O'Toole and Sophia Loren came out the year I graduated from high school. I LOVED this film. The message of persevering after worthy goals regardless of the odds and of not limiting yourself by "the world as it is" impacted my life. It's full of beautiful, dramatic, and humorous music and lyrics.

Following is the video from the film where the mad Don Quixote (he's really a country squire who thinks he's a knight (and sees windmills as dragons he must defeat). He's stopped at an inn where he's sure the inn's maid (and whore) is a fine, virtuous lady. The maid Aldonza--or Dulcinea as he calls her--has had a terrible, bitter life and can't believe the fine noble things Quixote is telling her.

The clip below shows both versions of the song To Dream the Impossible Dream from the movie. The first is when he sings to her and begins to bring her into his madness. Then, after some horrible things happen to both Aldonza  and Quixote has been brought back from his madness by his family, she comes to his home and reminds him of who he really is. It's a long video, but the basic song only take the first two minutes.

Did I mention that I LOVE this song? I love everything it stands for. And that, I hope, is reflected in my life's actions and the behavior of the characters I write.

The movie is the telling of the author Miguel de Cervantes's wait in prison before he must go before the Spanish Inquisition. The prisoners take his manuscript, and he must convince them they should let him keep it. That story is interwoven through the telling of Quixote's tale. At one point the prisoner, who is acting as the prosecutor, challenges Cervantes about the stupidity of dreaming and failing to see "life as it is".

I memorized this soliloquy from the soundtrack when I was in college. It still gives me chills.

What about you? Has there been any book or film that particularly impacted you and continues to influence your view of the world?