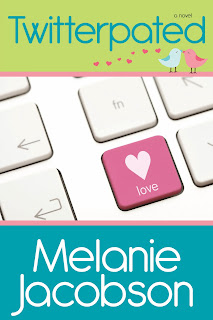 You guys are in for a treat. This week on my blog, I'm doing a giveaway for the fabulous Melanie Jacobson, the author of The List and Not My Type (both Whitney Award nominees, by the way--can you imagine competing against yourself? Some nationally known Whitney recipients/finalists include: Orson Scott Card, Stephenie Meyer, Brandon Sanderson, Brandon Mull, Dan Wells, Janette Rallison, Ally Condie, James Dashner, Aprilynne Pike, and David Farland to name a few).

Those of you who have followed me for a bit know that last May I went to the Storymaker writing conference and also signed up for Bootcamp. Melanie was my Drill Instructor, and she recently signed with Alyssa Henkin at Trident Media Group for a national project (under the name Melanie Bennett).

Well, Melanie has a new book coming out. Twitterpated. And you have the chance to win a copy!


Jessie Taylor is furious when her roommate secretly posts her picture on the dating website LDS Lookup—furious, that is, until she spends all night instant messaging Ben Bratton, a man whose wit and warmth just might make Jessie forget the train wreck of her last romantic relationship. Their first date is a smashing success (literally), but Ben’s overall awesomeness can’t save Jessie from having to deal with Craig, her competitive coworker whose baiting behavior sets new standards for obnoxiousness. Determined to beat Craig at his own game, Jessie spends long office hours finishing projects and putting out fires, but while her performance wows her boss, it only makes Ben skittish—after a failed engagement to an up-and-coming lawyer, he’s not about to pair up with someone who’s married to her job. Will Jessie figure out how to be true to herself and take her big chance at love before it’s gone with a click of the mouse?

What do you have to do to be considered? It's easy:
I'll do the drawing first thing on FRIDAY morning, March 16th, and announce the winner on my blog.

And don't forget to check out Melanie's other books (I LOVED them!)

Twenty-three-year-old Pepper Spicer is not living the dream. She ended her engagement at the last minute because fiance—a musician an soon-to-be reality TV star—wanted her to sacrifice her own career ambitions for his. Now she's stuck at home sharing a room with her little sister, trying to pay off massive debt for a wedding that didn't happen, and spending Friday nights Facebook-stalking everyone who has a better life. Her therapist father urges her to choose her career dreams and count her blessings by writing weekly thank-you notes, but gratitude is a tall order when she botches an important job interview and has to settle for writing an undercover dating web-zine column—the last thing in the world she wants to do. Still, as Pepper (byline:Indie Girl) chronicles her bizarre and hilarious blind dates, she gives her father's challenge a try and slowly finds herself leaving self-pity behind. Life takes a major upswing as Pepper's column hits the big time and she tastes the exhilarating thrill of success. But there's one tiny problem: the intensely hot man she's falling for is having issues with her job (again). Will Pepper trade her personal ambition for another chance at love?

Ashley Barrett doesn’t want to get married. At least, not anytime soon. She doesn’t care how many of her friends and family members and fellow churchgoers had weddings before they finished college — the last thing she needs in her fun-loving twenties is the dead-weight of some guy. And that’s why she created The List. By the time she completes all twenty-five goals — from learning a language to skydiving to perfecting the art of making sushi — she’ll be more ready to settle down. Maybe.

This summer in California is a prime time for Ashley to cross two items off the list: learn to surf (#13) and have a summer romance (#17). And Matt Gibson, the best surf instructor in Huntington Beach and the most wanted guy in the singles ward, is the perfect man for the job. Ashley hatches a plan to love him and leave him before heading off to grad school in the fall (#4, get a master’s degree). But when Matt decides he doesn’t like the “leaving” part, Ashley’s carefully laid plans are turned sideways. Now Ashley faces an unexpected dilemma: should she stick to the safety of The List, or risk everything for a love that may tie her down — or might set her free?