Against the Magic
"Against The Magic was a fresh twist on the Regency/Victorian Romance genre. I love it when people come up with something new!" ~Bubby, Bubble Bath Books
He broke her heart, and she never wanted to see him again. Now, they’re stranded together back in 1850.
Reese thinks she’s gotten over Jem Taylor—until he finds a way to tag along on her trip to England with her friends. She’s far from pleased. It only gets worse when they’re ripped nearly two centuries into the past. Reese finds her heart, and her choices, pulled in two very different directions.
Victorian England is not the setting Jem Taylor planned on to right his wrongs, but it will have to do. Choosing his job over Reese was the worst mistake he ever made, and he won't lose her again. But to win her heart back, he’ll have to fight the magic that brought her to that time—and an earl with the means to keep her there.
With the Magic
When Victorian earl Gareth Hildebrand travels to the future, he finds danger instead of utopia--especially for his heart.
As the eighth Earl of Kellworth, Gareth is accustomed to getting what he wants. Then he encounters a woman he suspects is from the future--a utopian future that he feels compelled to see. He intends to get what he wants, but it will involve dealing with fae magic. And that could lead to disaster--for his heart.
Dr. Catherine Ryan is drawn to the handsome guest at Twickenham Manor, with his odd combination of childish excitement and old eyes that have seen too much pain. She loses her heart to him before she discovers the truth of when he’s from. Now she faces the biggest decision of her life!
For the Magic
When Lady Ellen Hildebrand is ripped to the future, she finds herself not only fighting for the fae magic that sent her but also for her life.
Ellen’s first London Season was a disappointment. She fears she’ll never meet a man who will see her for more than her fortune or ability to provide an heir.
Landscape architect Michael Addington thinks his grandfather is mental but never dreams the old man will try to set Twickenham Manor on fire. In Michael’s struggle to stop the act of arson, a young woman appears out of nowhere. Flames and fae magic engulf them both, the first burning them badly and the second transporting them back to 1851.
Ellen and Michael find they must rely on each other through the painful recovery. Day by day, their attraction grows. But Michael is riddled with guilt. If she discovers his dark secret, he could lose her forever . . . he’s the one who set her on fire. 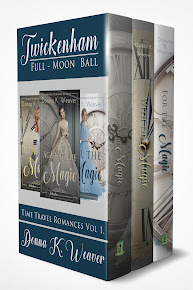