Ghost of an Inheritance

Lia’s dream isn’t lost—it’s just on hold. And this move is only temporary. Once she’s helped her dad remodel the castle he’s inherited, she’ll return to Sacramento to open her dessert boutique. Nothing can stop her. Not even the ghost determined to scare her family away.

She didn’t factor in seeing Coop again. Being near her old crush makes her heart flutter faster than any ghostly encounter. As they work together to rid the castle of its specter, Coop makes her heart come alive like never before.

But he intends to remain at the castle. Following her dream means leaving. Lia has the courage to stand up to the ghost, but is she brave enough to face a future with Coop?

He rescues people from danger. Can she convince him to save himself?

Trace Barton has it all—almost. But great friends and a dream job don’t make up for not having someone to share it with. When an old friend steps back into his life, he’s faced with a decision. Should he try for more and risk losing her friendship?

Brooke Howe’s mother is dead; that’s what her father had told Brooke since she was five. After his funeral, she discovers he’d lied to her, so she goes in search of the woman. Brooke is looking for answers, not love. When she meets Trace again she realizes she might have found both.

Except there’s something wrong with him, and he refuses to get help. Could she have found him only to lose him? 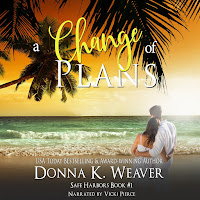