A Match for Maude

Charles is only supposed to guard Maude and her sisters to their destination. He should have guarded his heart.

Still raw with grief after their father's funeral, Maude Lancaster and her two younger sisters refuse an ultimatum from their ill-intentioned uncle. Since it’s a new century and women can travel unchaperoned, they decide to flee out west to live with their older brother. Their aunt hires Charles for protection, but Maude soon finds that her greatest danger is in losing her heart to a man she may never see again.

Former Pinkerton agent Charles Merrick has an opportunity for a new job in San Francisco. When his mother’s friend asks to hire him to escort her three nieces across the country, he agrees. Their destination is only a little out of his way. But Charles faces a stumbling block in his attraction to Maude. He's never felt such a connection with a woman before, but they’ve only known each other a few days. It’s too soon for there to be anything real between them. He can continue on to his dream job, or he can stay to see if Maude is the one. He can’t do both.

A Dandy for Doris
Widower Marshall Breckinridge is busy with his ranch and his two young daughters. How can a shy schoolmarm ever get his attention?
When rancher Marshall Breckinridge rescues Doris Lancaster from an attempted kidnapping, a spark alights in her, and she’s convinced they’re meant to be together. Unfortunately, the widower hasn’t spoken to her since. It seems teaching his two young daughters is as close as Doris can get to the busy man.
Marshall Breckinridge has been running for ten years. First, from his autocratic father and then from the loss of his wife. With two beautiful daughters and a dude ranch to run, he’d thought he’d put women behind him. Then he’d held Doris in his arms to comfort her. Now he can’t get her out of his mind. But he refuses to risk killing her timid sweetness with his forceful personality. Best to steer clear.
When his dandy cousin comes for a visit and sets his sights on Doris, Marshall will have to decide if he can stand to sit back and watch.
A Lady for Luke
She’s a high-society lady fleeing her family’s shame. He’s a simple rancher. Is love enough to bridge their differences?
After being disowned a decade ago, rancher Luke Hamblin has worked hard to make it on his own. His younger sisters suddenly join him but he loves having family around him again. He finds himself drawn to his new brother-in-law’s beautiful sister Judith, even though she acts like she’s too good for the lowly folks of Lilac City. When a bitter winter strikes early, he starts losing cattle to apparent wolf attacks. But why is his herd the only one suffering losses?
Escaping a family scandal that resulted in a broken engagement, Judith Breckinridge has joined her brother in Wyoming. As a protection from further rejection, she holds herself aloof. Luke is the one man she wishes to get closer to, but he keeps calling her "sister." When they're tasked with working together on the Christmas Fair, can she prove to him she’s more than a felon's daughter?
A Fella for Frances
Never underestimate a woman who has a rifle and is seeking justice.
It’s a new century, and Frances Lancaster is determined to take control of her future. She’s tired of being a pawn in her uncle’s odious ploys—especially now she suspects him of poisoning her father. To complicate her plans, her older siblings keep treating her like a child. She might only be nineteen, but with the help of her best friend, Nick, she’s determined to make the murderer pay. That means she’s going to have to do something outrageous and unexpected.
Nick Reynolds has been in love with Frances for months. She might have declared she’ll never marry, but he’s a patient man. He’ll settle for being her best friend because, for him, it’s either Frances or no one. When she asks him to help her by becoming her “temporary” husband so she can claim her inheritance, he can’t refuse. He’ll do whatever she needs to bring her conniving uncle to justice. But will Nick’s heart survive when he has to let her go?
An Equal for Edith
Spinster Edith Vosburg may yet find love but in the most unexpected place… amidst the rubble of an earthquake.
After the death of his wife last year, Dr. George Rasmussen decides he needs a fresh start. When he interviews for a position in a small Wyoming cow town, he discovers that his late wife’s dear friend, Edith, lives there. He’s impressed by her but tells himself he’s too busy caring for his three children to consider anything more than friendship.
Edith is perfectly happy as a spinster. Or so she says. When she sees George again after so many years, she’s surprised at the spark of attraction. She puts the thought out of her head, determined not to betray her friend’s memory.
When Edith travels to San Francisco with friends and George accompanies them to collect his children, disaster strikes. Surrounded by the destruction of the massive earthquake, with fires raging all around, the two are thrown together, fighting to survive.
Yet from the devastation, emerges hope for a possible new future—one Edith has always wanted. One with a family of her own.
But only if she can let go of the past... 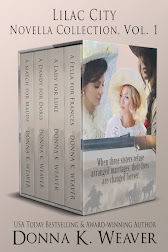