I have a new baby!

On Wednesday, there's a party on Facebook--with giveaways. You're welcome to drop by.
Click here. 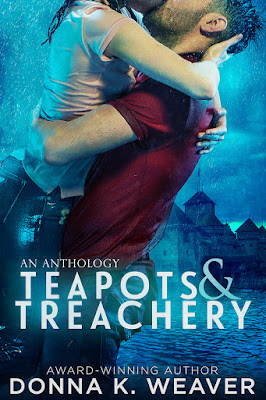 Lia Savage reluctantly puts her dream of opening a dessert boutique on hold to help her dad remodel a castle he’s inherited in Washington State. Soon, a specter targets her younger sister.

Lia enlists the help of strapping Coop Montgomery, the head gardener and her former crush. As they search together for a way to rid the castle of its ghost, the romance she used to dream about with Coop kindles. But Lia’s gentle giant means to stay in Washington while she’s determined to return to California. She must find the courage to face both the ghost and her future.

With Coop. Or without him.

Twenty-six-year-old Shelby Nash wants to break free of her controlling, billionaire father. With the completion of one more project for his company, she can branch out on her own. However, her ex-boyfriend’s been appointed as the new lead architect. She has to find a way to protect her heart from him while avoiding whoever’s making anonymous threats.

Wade Masters did a poor job handling the news about the identity of his girlfriend’s father. Shelby walked out of his life without another word. Finally, four years later, Wade has a chance to win her back. As long as whoever’s targeted her doesn’t get her first.


To celebrate, I'm having a sale and featuring a few others.

Lyn wants to move on.
She just doesn't realize it will take pirates, shipwreck,
and an intriguing surgeon to do it.

If you own the Kindle ebook,
the audiobook is only $1.99 more.

Going to a séance was supposed to be a harmless diversion in Victorian England, but for Delia Spencer, it was life altering. Since that day, she has been plagued by fainting spells, while her consciousness visits Elle Thomas more than a century in the future. In modern-day New York, Elle has kept secret the dream-like memories of Delia’s life. As the visits have become more frequent, Elle is confused about what is her life and what is not. Back in England, Delia’s father is determined to marry her off to any marginally suitable man before her illness becomes known to society. But will Delia consent, now that she’s had a taste of Elle’s independence?

Part young adult contemporary romance, part Victorian love story; a Clean & Wholesome story where love is interwoven with tragedy. This time travel novel is set in London, England and New York City. It is a clean romance packed with suspense and humor and plenty of kissing. Science fiction meets YA fantasy meets sweet romance in Years & an Ocean.
Amazon
$.99

Kylee Mansfield knows what it is to be alone. Her dad left when she was seven, and her mother remarried an abusive alcoholic. Kylee finds ways to escape reality, usually by substituting one pain for another.

Things take a deadly turn when a jagged cut shows up on her arm, and she doesn't know where it came from. She enlists her neighbor, Price Hudson, to help her uncover the truth. But Price shows her much more than just her past—he shows her what it is to be alive.

In need of his own redemption, Noah Carter finally confronts his childhood hero, the once-beloved uncle who betrayed him. Instead of vengeance, he offers forgiveness, also granting Uncle John a most curious request—for Noah to work on the ramshackle farm of Agnes Deveraux Keller, a French WWII survivor with dementia.

Despite all Agnes has lost, she still has much to teach Noah. But the pair’s unique friendship is threatened when Tayte, Agnes’s estranged granddaughter, arrives to claim a woman whose circumstances and abilities are far different from those of the grandmother she once knew.

Items hidden in Agnes’s attic raise painful questions about Tayte’s dead parents, steeling Tayte’s determination to save Agnes, even if it requires her to betray the very woman she came to save, and the secret her proud grandmother has guarded for seventy years.

The issue strains the fragile trust between Tayte and Noah, who now realizes Tayte is fighting her own secrets, her own dragons. Weighed down by past guilt and failures, he feels ill-equipped to help either woman, until he remembers Agnes’s lessons about courage and love. In order to save Agnes, the student must now become the teacher, helping Tayte heal—for Agnes’s sake, and for his.

Email ThisBlogThis!Share to TwitterShare to FacebookShare to Pinterest
Labels: A Savage Ghost, Book Launch, Lay Me Down, Teapots & Treachery, The Dragons of Alsace Farm, Waves of Deceit, Years & an Ocean